E-mail or call us for more information

When in 1989 successful Dutch producer, remixer and owner of the “Twenty 4 Seven” concept Ruud van Rijen started with this dance group, he couldn't foresee it's enormous success both nationally and internationally. TWENTY 4 SEVEN Feat. Nance, Jacks & Hanks
In November 2019 the fans of Twenty Seven got a massive surprise; Singer Nance made a comeback in Twenty 4 Seven and is ready to get back on stage with Jacks & Hanks. She was part of Twenty 4 Seven from 1989 until 1996 and is most famous for chart-topping hitsingles like 'I Can't Stand It', 'Is It Love', 'Take Me Away' and of course 'Slave To The Music'. It became a worldwide smash hit, claiming the number 1 spot in Australia, Czech Republic, most Latin-American countries and South Africa, hitting Top 5 in The Netherlands, Germany, Belgium, Denmark, Sweden, Portugal and many more!

In January 2021 Twenty 4 Seven Feat. Nance, Jacks & Hanks released their single 'Do You Want Me'. 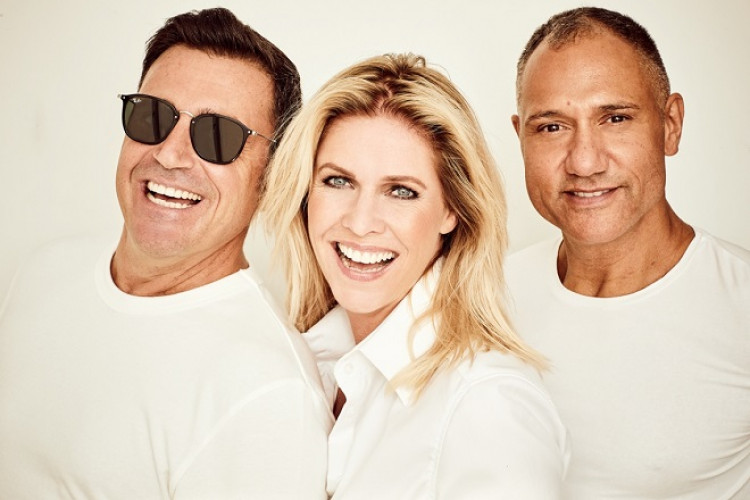 HOW DID IT ALL START?

TWENTY 4 SEVEN Feat. MC Fixx-It
In the beginning he started out with rapper MC Fixx-it. The single was called 'I Can’t Stand It'. This was a hip-hop track (100 BPM). The chorus was made by Ruud himself with a vocoder. Because it was just a little hit in the Dutch Tip-Parade Ruud decided to make the track more commercial. He started working out a Hip-House version (124 BPM) which was totally different from the original. This time he changed the chorus vocoder and used a female vocal. This was the first time Nance was introduced in the group. This record went Top 20 in The Netherlands.

After a few months there was interest by a record company in Germany. They loved the record but asked Ruud to re-record the record in Germany and use a different rapper. Ruud decided to do that. He started out with rapper Captain Hollywood and vocalist Nance joined by 2 dancers Jacks and Hanks. This re-recorded single became a smash hit all over Europe, claiming the number 1 spot in various countries. This led to worldwide success. The second single 'Are You Dreaming?' from the debut album 'Street Moves' appeared to be a good follow up in view of the chart positions it gained. ‘Are You Dreaming?’ made it into the Top 20 in The UK, Germany and The Netherlands. And in Denmark, Finland, Switzerland and Italy it even became a Top 10 hit!
After finishing the album 'Street Moves' Captain Hollywood decided to start his own career. Captain Hollywood eventually left the group. His place was filled by Stay-C in 1992. Until 1995 he and Nance formed Twenty 4 Seven.

TWENTY 4 SEVEN Feat. Stay-C and Nance
Their first single together was called 'It Could Have Been You', but unfortunately for them this single didn't have the impact they hoped it would have! Twenty 4 Seven went back into the studios and recorded the single 'Slave To The Music'. This single became an enormous success, claiming the number 1 spot in Australia, Czech Republic, most Latin-American countries and South Africa, hitting Top 5 in The Netherlands, Germany, Belgium, Denmark, Sweden, Norway, and Portugal and Top 10 in Finland, Singapore, the Philippines and Thailand. The next singles ('Is It Love', 'Take Me Away', 'Leave Them Alone', 'Oh Baby!') and album, also entitled 'Slave To The Music', were just as successful and helped Twenty 4 Seven to become a worldwide top-act. In several countries all over the world Twenty 4 Seven received Golden and Platinum Awards for both singles and albums.

In the same year in which Twenty 4 Seven proudly received the Dutch Export Award of 1994, the third album, 'I Wanna Show You', was released in December.  At times when the first single from this album, 'Oh Baby!', made it high in the charts in a big part of Europe. The second single 'Keep On Trying' saw its release in March 1995.  In spring 1996 they received a Golden Award for the album 'I Wanna Show You' (South Africa) and double Platinum for the album 'Slave To The Music' (also in South Africa).

TWENTY 4 SEVEN Feat. Stay-C and Stella
The Twenty 4 Seven fans had to wait more than a year for a new single. In that year Nance was replaced by Stella. During the summer of 1996 Twenty 4 Seven released a new single 'We Are The World' and a couple of months later the release of 'If You Want My Love' was a fact. The release of this track was delayed a couple of times because 'We Are The World' suddenly did very well in many countries. After 'If You Want My Love' they released 'Friday Night' and the new fourth album 'Twenty 4 Hours 7 Days A Week'. The release of the single 'Né Né' came a few months later. It was recorded with Stay-C. Stella wasn't part of the group anymore at that moment. After this release Ruud decided to stop the Twenty 4 Seven project for the moment.

TWENTY 4 SEVEN Feat. Elle
After a period of 11 years of silence Ruud decided to pick up the pieces and proceed with the group. In 2005 he met Elle and was impressed of her voice. After working a while in the studio, Ruud decided to record the new Twenty 4 Seven single with her. In September 2007 the recording of the Twenty 4 Seven track 'Like Flames' was a fact. A great video was shot, in which Elle showed her talent as well as her beauty. The hectic life of showbusiness drove her back to her former job, away from the spotlights.

TWENTY 4 SEVEN Feat. Stay-C and Li-Ann
Right after Elle left the group, Ruud bumped into this marvelously talented and beautiful young female singer Li-Ann. She was one of the winners of a very popular talent TV show in The Netherlands, in which she competed with thousands of other talented people. The winners of this contest formed the girl group named 'Raffish'. A group of 5 cautiously selected beautiful and talented young girls. After several hits the group split up and Li-Ann started her solo career. She released 2 singles 'Pop The Cherry' and 'Friday', both accompanied by great video’s. When Ruud approached her to be the female singer of Twenty 4 Seven and told her about the upcoming plans and activities of the group, she grabbed the chance to travel around the world and do concerts in all regions where Twenty 4 Seven is still very popular. All Ruud had to do now is get Stay-C back on the train, which wasn’t very hard after he heard about the plans and the cooperation with a talent like Li-Ann. Ruud produced a new 2010 version of their classic 'Slave To The Music' and the voices of Li-Ann and Stay-C matched perfectly in the studio. 'Slave To The Music 2010' was released in November 2010 and the video of this track was shot with one of the most sophisticated camera’s around at that time.

Stay-C and Li-Ann will be working 24/7 all around the world again. They started off in Latin America, where they had some very successful concerts, proving the everlasting popularity of Twenty 4 Seven. TWENTY 4 SEVEN Feat. Nance, Jacks & Hanks
Singer Nance made a comeback in Twenty 4 Seven and is ready to get back on stage with Jacks & Hanks. She was part of Twenty 4 Seven from 1989 until 1996 and is most famous for chart-topping hitsingles like 'I Can't Stand It', 'Is It Love', 'Take Me Away' and of course 'Slave To The Music'. It became a worldwide smash hit, claiming the number 1 spot in Australia, Czech Republic, most Latin-American countries and South Africa, hitting Top 5 in The Netherlands, Germany, Belgium, Denmark, Sweden, Portugal and many more!

During the years Twenty 4 Seven had many successes all around the world. They performed at parties and festivals in South Africa, Chile, Germany, Australia, Czech Republic, Spain, Asia, Belgium, Scandinavia, Italy, their home country The Netherlands and many, many others.

E-mail or call us for more information